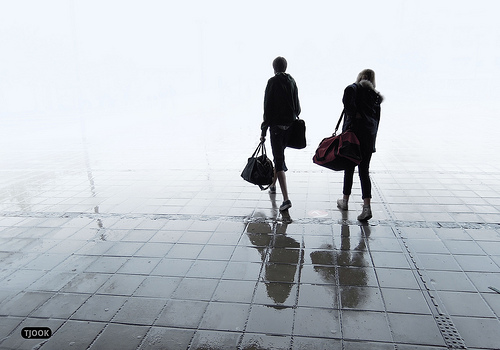 The cab driver was waiting for me to get in while my wife and kids are still giving me “the hugs and kisses.” He was commenting on the fact that my kids – ages 9 and 11 – still feel very comfortable of giving us hugs and kisses whereas his 3-year-old can’t even be bothered while playing with his iPad. To which, I responded, “I hate leaving but travelling is part of my job.”

This past week puts another PASS Community Summit in the books. This happens to be the world’s largest and most intensive technical training conference for SQL Server and BI professionals. Its amazing how active the members of the SQL Server community have been throughout the week, tweeting and talking about their experiences – even after midnight.  I have had the privilege of volunteering every time I attend this event. I even wrote a guidebook for first time attendees on how to maximize their attendance at the event. Part of that preparation is getting assimilated to the #SQLFamily. I talked about building meaningful relationships at the PASS Summit in a previous blog post where the conversation transcends beyond Twitter, Facebook, LinkedIn or email. We hang out during events, sometimes even outside of events – #SQLKaraoke, #PASSPrayers, #SQLRun, PhotoWalks, and a whole lot more activities. This brings the community members closer to each other beyond the usual T-SQL conversations and the references to BigData and BI. It is indeed like the biggest and most intimate family reunion you’ve ever experienced.

I’ve asked a lot of first time attendees what they think about the PASS Summit experience. The common responses were “amazing” and “awesome.”  To which, I asked follow-up questions like, “what made it awesome?” One first time attendee commented, “I feel like I’ve found an extended family.” Another one responded, “I feel like I belong here.” I pointed to some of the attendees giving hugs and high-fives and told them that this is a common thing among members of the SQL Server community, especially during events like this. They were a bit shocked at first but slowly have gotten used to it throughout the week. It’s no wonder some of them felt similar to how I did come Friday. It was time to say goodbye.

I spent the entire week catching up with friends and folks that I have met at previous events. Some I have considered very good friends, others like part of my extended family (I always refer to Pinal Dave as my half-brother from a previous life.)  Still, a week is not enough. But it was time well spent.

As I race back to the parking space to grab my rental car, I was stopped more than ten times to say goodbye to my #SQLFamily. I was glad that I had a flight to catch, otherwise, I could have stayed longer. I was coming home to my real family. However, I felt the same way when I was leaving home a couple of days earlier. I hate to leave. But it is part of my job – leaving my family so I could share the love to those who need it in my workplace. When I teach and mentor a junior DBA in my team, that is because I received the same love and care from my newly found family. When I face difficult challenges resolving a database performance issue, I face it with confidence and courage knowing that they’re there to support me. This is not just a SQL Server community. It is “the #SQLFamily.”

This still doesn’t change anything. I so hate leaving my #SQLFamily.