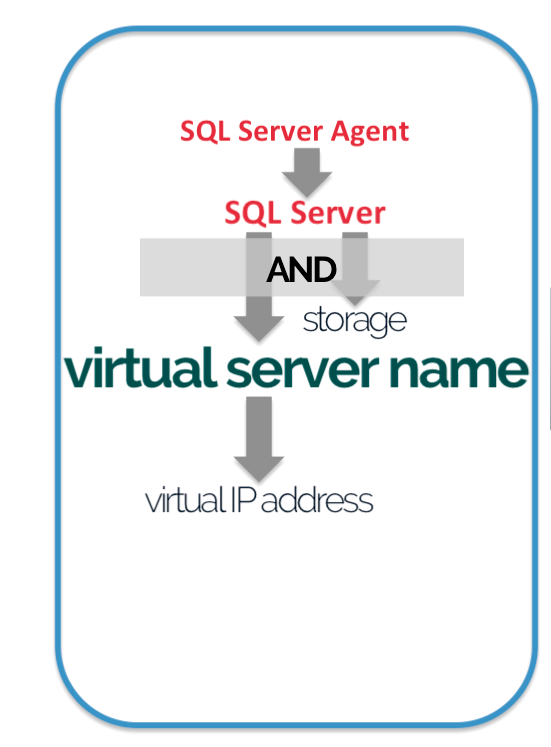 One of the demos that I show when I talk about AND dependencies in a Windows Server Failover Cluster is moving a SQL Server resource group (or role as of Windows Server 2012 and higher) to a different cluster node.

During the failover, I highlight that the SQL Server cluster resource will not come online until both the network name (virtual server name) and the shared disks resources come online – hence the concept of the AND logic dependency. Refer to the picture above for reference. Because the node that runs the SQL Server cluster resource also owns the shared disk resource, the cluster has to release the ownership – be it via intentional or accidental failover – before any of the cluster nodes can take ownership of the disk. The amount of time it takes to bring the SQL Server cluster resource online is partially dependent on the amount of time it takes to unmount the disk on the original node and remount it to the target node. That also means that if the storage subsystem becomes the bottleneck of this unmount/remount process, the SQL Server instance will take longer to bring online and impact availability. Wouldn’t it be nice if we could eliminate the unmount/remount process during the failover to reduce downtime?

Enter Cluster Shared Volumes (CSV). This feature was introduced in Windows Server 2008 R2 primarily for use with the Hyper-V role. The idea behind it is to provide a shared disk that is made available for read and write operations by all nodes within a Windows Server Failover Cluster, a true shared disk in its real sense. We still need to use a shared disk for the cluster but, instead of using it in a traditional way, we convert it to a cluster shared volume. CSVs have truly made shared storage what it really is in the context of SQL Server databases. As a SQL Server DBA, this, for me, is more than enough reason to upgrade to SQL Server 2014 (or higher) both from a high availability and ease of management points of view. And if you’re wondering about the cost of licensing, keep in mind that failover clustered instances are still supported on Standard Edition so long as you only have two nodes in your cluster.

[callout]NOTE: Registration for my online course Windows Server Failover Clustering (WSFC) for the Smart SQL Server DBA will re-open in January 2018. But be sure you do not miss out. This will be the last time that the course will be offered. After this, you will no longer be able to register for the course.[/callout]