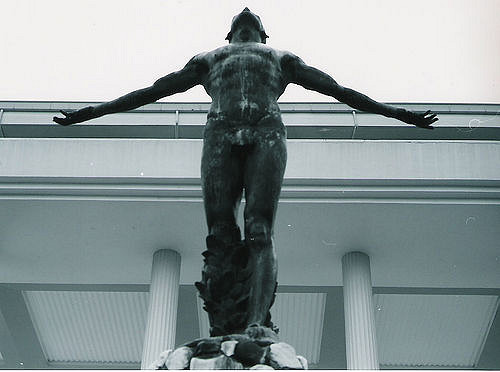 University of the Philippines Oblation by randyg

I’m rarely vocal about my political views for “fear” of being branded as a leftist (I used the word fear because leaders are not immune to the feeling: they just know how to deal with it.) When I was in the university, I was almost always associated with the leftist primarily because of what I wear and who I hang out with. Most people know me as somebody who’s passionate about my country – the Philippines – even when I was still a kid. And I consider myself as an “unofficial Philippine ambassador.”

Last Friday, I noticed several media personnel in the University of the Philippines (UP) (Manila campus.) I wasn’t aware of any issues surrounding the premiere state university in the country because I try to avoid reading the news. I was intrigued. When I got back home, the first thing that I did was check the news. It turns out that there was a freshman university student who committed suicide because she was forced to take a leave of absence for failure to pay tuition fees. This became instant news, especially with the upcoming senatorial elections in May of this year. A friend of mine posted a very intriguing question on Facebook regarding the incident: is the University of the Philippines for (a) Poor Pinoy students, (b) Academically Excellent Pinoy students or (c) Academically Excellent Poor Pinoy students? I responded. Not because I wanted to defend my alma mater. I wanted others to understand that there was a much deeper issue that had to be dealt with. It was an issue of the heart. An issue of entitlement. It’s sad to hear about the loss of a loved one. More sad to realize that people are blaming the system without first looking for answers from within. Some say the student was killed by the system. Others say she was a victim of  a repressive policy that wasn’t in favor of education as a right. A characteristic of true leadership is taking responsibilities for any actions done. Below was my response to the question.

I try to avoid telling others that I went to University of the Philippines (Diliman campus) primarily because (a) I failed “17 courses” in my undergraduate program and (b) nobody wanted to hire me because of the former  Now, when the UP system was founded back in 1908, the ultimate goal was to provide a high quality of education to the Filipino people. Nowhere in the original goal did it mention that it was for “anybody poor.” The system has evolved into what it is today primarily because it was partly subsidized by the government. With the economic journey of the Philippines after World War II, where it used to be a first-world country in Southeast Asia, most people in the government took advantage of the UP system as a means to advance their political career. Because there was an increase in the population of those living below the poverty line, the UP STFAP was born. The UP STFAP program was conceived in the late 80s, following the People Power revolution. This was the time where there was an increasing gap between the rich and the poor. This created an ever increasing “entitlement mindset” among those who are poor-yet-deserving students to go to the UP system. The very reason why tuition in the UP system is way higher than the other state universities is because they subsidize other state universities. So, to answer your question, the UP system is for the academically excellent Filipino students, regardless of economic status. For those who feel that they deserve to go to UP, go ahead and prove that they indeed deserve to go there. I couldn’t afford a UP education because it was relatively expensive for me. I had a choice between not pursuing a university degree (cheaper,) going to other state universities (a little more costly,) going to other private institutions (most expensive) or going to UP (bordering between cheap and expensive.) I chose to go to UP. I fought to stay in UP. I sacrificed a lot to go to UP. Now, do I deserve to go to UP because I was poor? Absolutely not! But I made a choice to go there, stay there and earn my university degree for there no matter what. I knew how it felt like to go from UP STFAP’s bracket E1 to bracket A (during my time, the UP STFAP used a numeric system for the brackets.) I knew how it felt like to scour for funds to finish my degree regardless of what my STFAP’s status was. Education, I believe, should be a right.