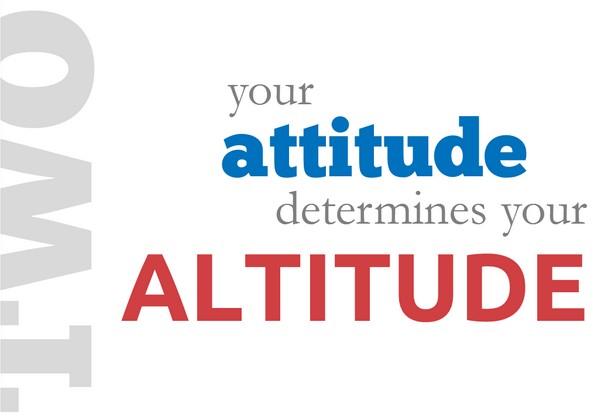 Our thoughts lead to actions. Our actions lead to habits. Our habits lead to character. Our character develops our future.

This is the second in a series of blog posts that talk about success. I had the opportunity to ask the registered attendees for SQLSaturday Philippines to vote for a particular topic that they like best. Since I usually talk about professional development for IT Professionals at the PASS Summit, I provided a list of topics from presentation skills to landing your dream job. This was the one that got the most number of votes: What Your College Education Didn’t Teach You About Success.

This was the second slide in my presentation about what our education doesn’t teach us about success: ATTITUDE DETERMINES ALTITUDE. Unfortunately, our education system is more concerned about test scores and IQ than emotional intelligence (EQ) or even attitude development. I bet that if you ask a lot of successful entrepreneurs, leaders and business people, they will tell you that their attitude has been a major contributor in their success. Our attitude is the only thing that we get to control 100% of the time. While we don’t have any control of our circumstances, we have full control of our attitude. It’s a matter of choosing which attitude we carry around with us that will determine how successful we will be.

I have to admit that choosing the right attitude is not easy. I wasn’t all that positive in the past. I complained about almost everything, saw myself as way better off than anybody else I knew and blamed others for the misfortunes that I experienced. It took me a while to realize how my attitude is affecting my career and, eventually, my future.  My drive to be excellent at everything I do compensated for my bad attitude but it wasn’t long until the bad attitude finally caught up. As I was in the middle of my failed startup, my wife gave me a wake up  call. She told me that unless I start changing my attitude, things will only be heading further south. I had to make a choice. The process was painful. It was like unlearning all of the stuff that I’ve learned throughout the years. But I was determined to go thru it. Years later, I was trying to figure out how I managed to go thru the process so that I can share it with others. It’s not that I was smart enough to learn about a process I followed that helped me overcome a bad attitude. I was clueless back then. But here are three things that I did to help me develop a positive attitude:

Having a great attitude is key to success. It’s so important that Dr. John C. Maxwell, America’s leadership expert, wrote an entire book about it – The Winning Attitude. But it doesn’t come easily. I still have to work hard at it every day, choosing to start my day with a right attitude. Now, I’m one of those who claim that having a great attitude has contributed a lot to where I am right now.

Question: What one attitude that you want to change today to become a better person tomorrow? You can leave a comment below.